You know that you’re having to stay off your feet when you finally get around to catching up! Back in February we did a part stretch of the Cheshire Sandstone Trail.  It is a post that I’ve been wanting to share for ages.

We were staying down at my parents’ place on the Wirral for a few days before we headed down to London and decided to use the time to explore some of the trails that we have yet to tread.  The Cheshire Sandston Trail being one of them.  Of course we were only able to do part of it as the whole thing is 48 miles.  Actually, saying that we have decided that we would like to challenge ourselves to do the whole thing in a day, but perhaps with my feet it’ll have to be next year now. Boo.

We parked up at the Bickerton Poacher campsite which was empty being the time of year.  I’m not sure whether we were supposed to park there, but we did.  Best to check properly is you’re going to visit – especially if you doing during camping season as it could be very busy! From there we followed our route over the road and up the hill.

To be totally honest, it was more challenging than we had expected due to the rain that had been lingering the days before.  The leaves were slimy underfoot and the rocks just generally slippery, so we had to make the ascent with care.  It is amazing how much longer a climb can seem when you’re having to be extra careful.

The climb was worth it even though as soon as we reached the top we were on our way back down again.  Down to the copper mine towards the road (the road we drove in on and crossed to go up the hill).

Laid at the bottom edge of the Bickerton Hills is the Grade II listed Engine House Chimney. This was part of the copper mining that was going on in the area since the 17th century and the chimney is the last remaining part of the building.  It is hard to believe that the tower is so old when you get close to it!

Although it seemed a bit random to go up the hill only to come down again, it really was good being able to explore the chimney and see where the copper mining had been carried out.  We also got to warm up our muscles and the sun came out too!

The next part of the walk was more like how we expected it to be.  Muddy paths winding their way uphill through the trees.  Tempting us with glimpses of views over Cheshire in the distance then turning us back to the shaded woods.

the Sandstone Trail is set into the hills so it has lovely up and down winding paths to follow.  A good workout for the bum and thighs too.  Each turn led you to see something you wouldn’t expect.  Having lived on the Wirral for half my life, it was fun to see something that I never had before.  The trail is not far from the M56 and I have looked longingly at it when in traffic for years when travelling up and down from Manchester.  It is amazing the views you get when you’re only half way up too.

After you start covering yourself, you really do just to start embracing it.  Which is lucky really as in February after a number of showers, you’re sure to find some excellent muddy patches.  As we most certainly did!

It was by this point on the trail that we had really fallen for it – mud and all!  We were already discussing the possibility of trying to do the whole thing in a day.  Unfortunately, unless my feet decide to make a magical recovery from whatever is ailing them, it looks like it might have to shift to next year.  Or in autumn…

The route starts taking you up some green stairs which we knew was taking us up to the top of the Sandstone Trail.  The ridge that we spot from the motorway, the trig point and the place with the views.  Our bottoms feeling the hills, we made our way joyfully to the top.

To our surprise, it wasn’t the top!  There were, however, some fantastic views all the same so we took the time to enjoy them before heading up the next set of stairs.  It is funny how everything looks so different from up above rather than ground level.  The wind farm looked so serene and slow compared to the static effect they have when you spy them from the M56.

Jit was grabbing a panorama (which I will snag and post when I get the chance) and I was enjoying seeing the countryside that I usually see whooshing past me in the car.  Even with the grey skies breaking up the blue, the visibility and loveliness was second to none.

The other thing that surprised me, despite being a Wirral/Cheshire girl, was how clear you can see the layers of sediment in the sandstone.  The whole of the area is known for the sandstone but you don’t tend to see every sandy Pantone in one piece.  Even when  at Thor’s Rock, you don’t get the definition you get on the Sandstone Trail.

After absorbing the views in both our eyes and cameras, we wanted to get back on track and up to what we hoped to be the trig point.  Rounding the stairs, we realised that the side we though we were on was actually the opposite side.  We were now heading toward the motorway view and the highest point of the Sandstone Trail.

And ta-da! We arrived at the Sandstone Trail trig point.  Only to find a group of older people picnicking right around it.  They weren’t going to move no matter how many photographs we took of them and their stuff around the pillar.  Feeling rather English that day, we didn’t ask them to move either and opted for taking a picture nearby.  We are laughing because of our conversation about Photoshopping it in behind us!  I love this picture, we look so cheeky and happy all wrapped into one! (awww, sopster alert!)

Unfortunately, the view was better at the last point, but we did manage to snag a pretty nice shot between the trees and over the the low lying Cheshire plains.

Back to the car

OK, so that makes it sound nice and easy.  It wasn’t quite that easy, but it was enjoyable.  The leaves, mud and slippery rocks made it a little less easy, but funny with the shrieks and giggles as we went downwards. The way down had more views into the open countryside instead f being so wooded, so we got to check out the cows and fields.

That’s not to say that the route was free from rocky vistas.  We had those too, so enjoyed a nice combination on our way back to the car.

It does seem weird writing about winter when it is mid June, but I have enjoyed looking back on my experience at the Cheshire Sandstone Trail. Even though it was a bit wet and muddy, we had a great time.  The views are stunning, we got to (kind of) bag a trig point and also finally saw the ledge that we’ve been cooing over for years.  A definite win in my book and writing this up has refueled my keenness to walk the entirety. Keep your eyes peeled for me announcing something, at some point!

Depending on how our trips go this year, we might do another part of the trail by having a staycation at my parents’ home again.  But we will have to see…

All I have to do is cross my fingers for my feet and get working on recovery.  In the meantime though, you get to catch up on my adventures from earlier in the year.  Kind of a win for us all. (maybe more you than me!)

Have you walked any of the Cheshire Sandstone Trail?  Would you like to? Would you sponsor me to walk the whole lot? (just being cheeky with that one!)

Where do you like to wander when it’s muddy?

Let me know in the comments below. 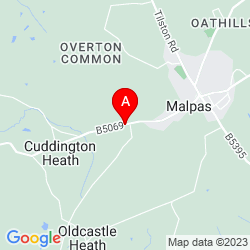